Why the Best Beef Requires the Best Pasture

We operate on the premise that grass finished beef tastes better than grain-fed grocery store beef.  But don't just take our word for it!  Check out these links to various taste tests concluding that the best beef is finished on grass, not grain. And if taste tests by others don't convince you, check out the link below on how to perform your own blind taste test!

Despite all the taste tests favoring grass-finished over grain-finished beef, we will be the first to admit that some people simply like the taste of grain-fed beef better -- just like some people like a Bud Lite more than say, Guinness, or their local artisanal brew. To each his own!  But, there is a reason Bud Lite doesn't win gold medals in taste competitions!  It may be OK for some palettes, but if you are serious about serving and eating great food and drink, you want it to have depth and character.  That is NOT what mass-produced beer is known for!

Commercially produced beef is a little like mass produced beer: cheap, and consistent.  About the best you can say about beef from factory farms is that it is reliably not terrible.  On the other hand, it is just as reliably not great.  Why?

Fat is Key, and Diet Determines the Flavor of Fat

As chefs will tell you, the primary source of flavor in all meat comes from the fat laced in minute amounts throughout the muscle. An animal’s diet determines the chemical makeup of the fat, in turn, the meat's flavor.

Grocery store beef is produced by a diet dominated by corn and soy.  These are cheap to produce, government subsidized, and bland-tasting.  (To illustrate this point: textured vegetable protein is processed soy, and it is used widely in manufactured foods because it is so bland it can be added to almost any recipe without much impact on flavor.)

A diet rich in fresh green plants is going to  produce a different flavor profile than a diet based on corn and soy. This  is similar to how soil types produce very differently flavored wines -- the phenomenon known as "terroir."

Let's look at beta-carotene -- just one of the many compounds found in abundance in healthy pastures.  This a good example to explore, because unlike the majority of micro-nutrients within beef, (which cannot be seen with the naked eye) you can actually SEE how beta-carotene affects the fat!

Beta-carotene (an important antioxidant, and the precursor to vitamin A), is visible as a pigment coloring food. It's what makes carrots orange, and the yolks of our eggs darker than eggs from hens fed grain at a factory farm. Grasses and clovers are loaded with beta-carotene; grains are not.  Mass-produced commercial cattle, typically finished on corn and soybeans, have a pale-colored fat, while cattle finished on grass pastures have rich yellow-colored fat.  And in this case, more color means more nutrients and more flavor -- just as eggs from free range hens taste better than those from hens raised in confinement and fed corn and soy.

Beta-carotene is just one of many micro-nutrients that are more abundant in beef raised on a grass diet.  Grass-finished beef is also higher in healthy omega-3 fatty acids and minerals are also found in greater amounts in grass-finished beef. (Read more on nutrition here and here, and lookout for our upcoming blog post on the health benefits of grass-finished beef). In combination, these micro-nutrients and minerals produce a more nutrient-dense, richer tasting steak -- just like a tomato from your garden has more nutrients and tastes better than a hot-house tomato.

Bottom line:  Grass has a different set of compounds, minerals, and nutrients than grain, and these make a difference in how the fat of grass-finished beef looks and tastes.  It is a deeper, richer, slightly nuttier and sweeter flavor than grocery store beef.

At Lick Skillet Farm, after 20 generations of cows and calves, we've learned not to feed any grain at all.  Instead, we carefully manage our pastures with clovers, grasses, and wildflowers, selected for their beneficial impact on taste and nutrition (and also soil health).

We encourage you to do your own double-blind taste test (instructions here) and taste the difference in properly grass-finished beef! 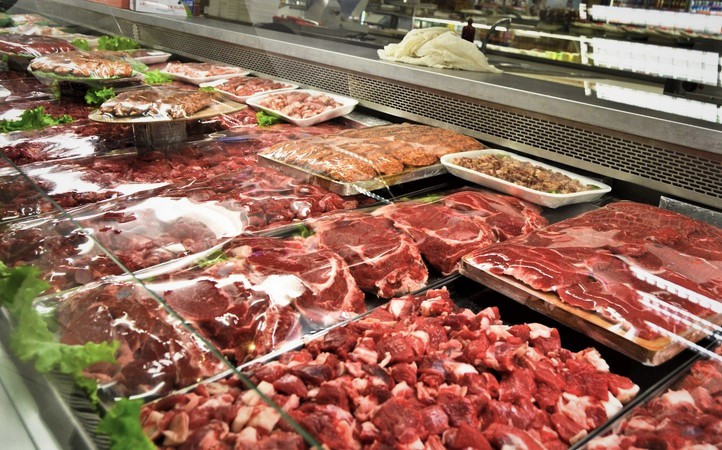